About ten years ago, I tried to take my own life. This is an admission I’ve only just recently begun getting comfortable with. In my early twenties, I was diagnosed with endometriosis and an autoimmune condition called interstitial cystitis. I lived in constant pain. On top of that, I was newly married and trying to adjust to a marriage that was, in a word, tumultuous, all while being shuffled in and out of various doctors’ offices looking for some semblance of relief. Years went by and I tried multiple treatment modalities, including numerous surgical procedures with very little payoff. My marriage, my health, my life as a whole, was failing.

I entered counseling that ultimately helped me to make the difficult decision to end my marriage. Though there was immense relief in this choice, there was also profound sadness. What people don’t often tell you is that even when a divorce is the right decision for both people, it’s still a mourning process. However, what I mourned the most was what I perceived as a personal failure; that because of my depression and medical issues I had failed to make it work. I felt that somehow it was my fault I was sick, both physically and mentally. My physical health hit an all-time low after an unsuccessful surgical procedure which ended up costing me my job because I was unable to work. Soon after, I found out my ex was getting remarried and that sent me into a tailspin. I didn’t miss him or want to be with him still, but what I saw was him finding happiness while I felt like I was so far away from my own. That same night, I attempted to take my own life. The guy I was dating at the time broke down the door to the bathroom and saved my life. I wish I could tell you this was the moment in which my life turned around, but that would be wholly false.

Instead, this started a long and frustrating journey toward healing. At the time, I defined ‘healed’ as a destination, an end goal, and once I reached it, I was allowed to be happy, whole, and healthy. What I failed to realize at that moment was how that mentality didn’t allow for life to happen in the in-between. It failed to acknowledge all of the grace and love that gets us closer to the destination or that my life was still valuable even if I wasn’t healed and whole. During this time of trying to find healing, I went to therapy, tried even more treatments for my interstitial cystitis and endometriosis pain, started to feel better physically, began a new career, dated, took a single sabbatical, started dating again, got remarried to an amazing guy, and launched a successful business and podcast. My life was on a general upswing for several years. Sounds like a happy ending, right? Wrong. I was hitting all these milestones and though there were happy moments, I still wasn’t happy. I still wasn’t healed. I’d read all the self-help books. I was putting in the work, so why hadn’t I found happiness? Why hadn’t I been healed yet?

At the end of last year, my physical health began to deteriorate once more and my mental health went right along with it. I remember crying one night to my wonderfully supportive husband, feeling there must be something wrong with me. I had done all the treatments, the therapies, the work, but yet here I was, back in the same place. I felt sad, restless, confused, and sick. What was so fundamentally wrong with me that I couldn’t find healing, no matter how hard I looked? Well, ask and you shall receive because the universe basically yelled an answer in my ear…

You aren’t finding healing because you’re constantly looking for it. It’s not a destination. Healing is a way of living. It’s the grace you give yourself on the days that the depression rears its ugly head. It’s the love you give yourself by slowing down when you don’t feel well physically or mentally. 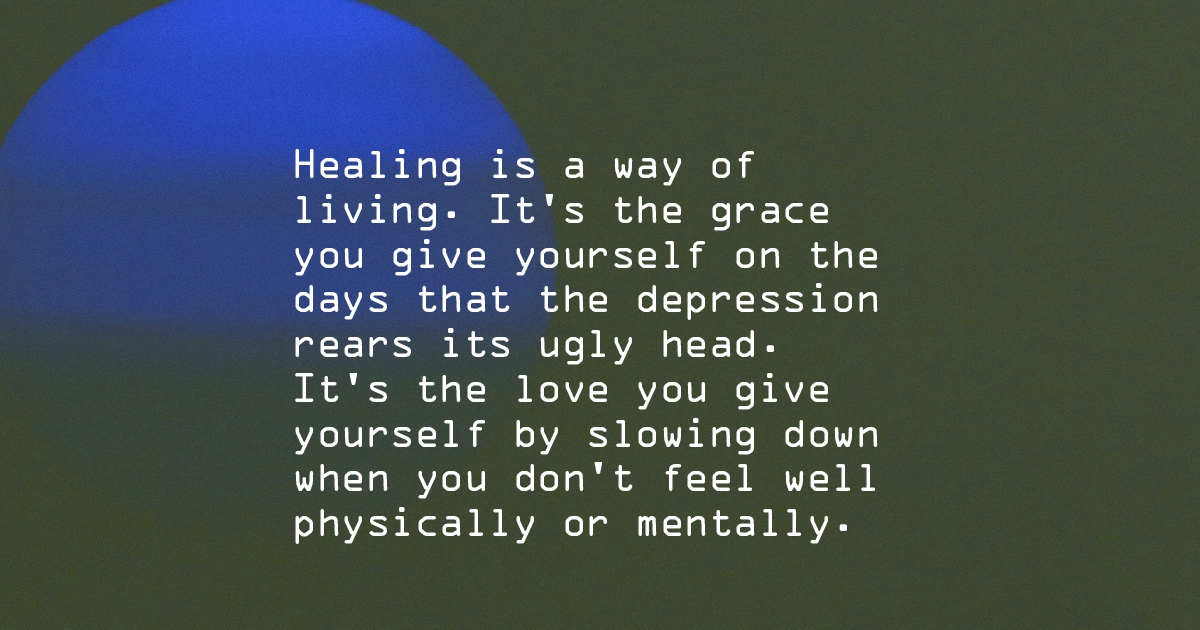 I had been looking at this healing thing all wrong. If I could only be healed by feeling well or happy 100% of the time, I would never get there. That’s not how depression works. That’s not how life works. What I could do was acknowledge my depression, give myself grace on the tough days, and enjoy the happy moments as they came. The second I stopped viewing healing as the destination, my life changed radically.

Those bad days are now a little further apart and they don’t last quite as long, because I can acknowledge that feeling like this doesn’t mean there’s something wrong with me. It simply means I’m human, whose healing is in progress. We are so often focused on the destination that we fail to see how much we are actually accomplishing. We don’t give ourselves credit for the wins, no matter how small they may seem and we certainly don’t give ourselves grace on the days we feel like we’re losing. There’s healing in letting go, but only if we can release control and expectation long enough to find it.

I was in therapy for fifteen weeks, called the crisis line six times, and made one attempt to stop the pain. But these numbers are not the ones that define my experience.

Today I thought about the ways I could kill myself. A mental list formed in my mind.

Sometimes We Don’t Show Concern Until It’s Too Late

In life, there are often times when we don’t always know what to do or say.

Sign up for our newsletter to hear updates from our team and how you can help share the message of hope and help.